My Weight Gain: Up 25 pounds overall.  It looks like weight gain is beginning to slow down so I am guessing I will be up around 30 pounds by the time I deliver (if she isn’t too late!).  That is a healthy amount of weight, yay!

Her Size: You never know exactly, I don’t know if she is a big baby or a small baby but we can guess that she is around 18″ long and creeping up toward 6 pounds already.

Sleep: For the most part, it is still good!  I am so grateful.  All I need is an extra pillow or blanket and I am good.

Cravings:  Sweet things are great.  However, I mostly focus on liquids because getting dehydrated while pregnant is pretty much the worst thing.  It’s so much worse than before because I actually feel very sick if I get dehydrated, rather than just a little headache or dizziness like I would before.

Movement/Orientation:  LOTS!  It seems that up until this point she respects my ribs.  Her feet are definitely up near my ribs but she doesn’t really lodge herself underneath them (which is great).  My midwife says she is also facing head-down, hooray!  However, I don’t know if she’s anterior or posterior.

Difficulties: Breathing.  I get out of breath really easily now and always sound tired (even if I am feeling okay).  Also, bending down.  Making sure I don’t overwork physically to exhaustion.  Getting up.  These are all so normal though, I really can’t complain.  Everything is more difficult I guess.  She is really running out of room in there and seems to want to kick more.

For this month’s picture, I did not care enough to change my clothes to be wearing the same shirt that I have been…so we went with this 🙂

I recently changed midwives and I am so glad that I did.  Now, I have all of my appointments scheduled out in advance and they are all with the same midwife!  I know that she probably won’t deliver my baby, but having consistent and competent care up until that point is still important to me.

There have been several baby showers already for me and there is one more to go!  I am too tired to go into detail about all of them but I am so grateful for those that threw them for me and they were truly special 🙂

The nursery is almost done!  I think I will do a post where I put up pictures soon.  It’s not as if an interior designer has been in there, but it’s still pretty cute 🙂 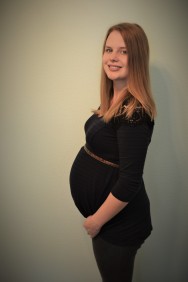